Are we living in The Matrix or a Game?

Prepare to go down the rabbit hole.

Are we living in a simulation?

Go even deeper if you dare!

Arguments against the simulation hypothesis

Why the chances may be less than 50 per cent.

Are we living in a computer simulation?

This article was originally published by Sean Illing at Vox

Are we living in a computer simulation or a game?

The question seems absurd. Yet there are plenty of smart  people who are convinced that this is not only possible but perhaps  likely.

In an influential paper that laid out the theory, the Oxford philosopher Nick Bostrom showed that at least one of three possibilities is true: 1) All  human-like civilizations in the universe go extinct before they develop  the technological capacity to create simulated realities; 2) if any  civilizations do reach this phase of technological maturity, none of  them will bother to run simulations; or 3) advanced civilizations would  have the ability to create many, many simulations, and that means there  are far more simulated worlds than non-simulated ones.

We can’t know for sure which of these is the case,  Bostrom concludes, but they’re all possible — and the third option might  even be the most probable outcome. It’s a difficult argument to wrap  your head around, but it makes a certain amount of sense.

Rizwan Virk, a computer scientist and video game designer, has just released a new book, The Simulation Hypothesis, that explores Bostrom’s argument in much greater detail and traces the  path from today’s technology to what he calls the “Simulation Point,”  the moment at which we could realistically build a Matrix-like simulation.

I know nothing about computer science, but this idea that  we’re all characters in an advanced civilization’s video game is, well,  kind of awesome. So I reached out to Virk and asked him to break it  down for me.

A lightly edited transcript of our conversation follows.

The simulation hypothesis is the modern equivalent of an  idea that’s been around for a while, and it is the idea that the  physical world that we live in, including the Earth and the rest of the  physical universe, is actually part of a computer simulation.

You can think of it like a high resolution or  high-fidelity video game in which we are all characters, and the best  way to understand it within Western culture is the movie The Matrix,  which many people have seen, or even if they haven’t seen [it], it’s  become a cultural phenomenon now beyond the film industry.

In that movie, Keanu Reeves plays the character Neo, who  meets a guy names Morpheus, who is aptly named after the Greek god of  dreams, and Morpheus gives him a choice of taking the red pill or the  blue pill. And if he takes the red pill, he wakes up and realizes that  his entire life, including his job, the building he lived in, and  everything else, was part of this elaborate video game, and he wakes up  in a world outside of the game.

That is the basic version of the simulation hypothesis.

Are we living in a simulated universe right now?

There are lots of mysteries in physics that are better  explained by the simulation hypothesis than by what would be a material  hypothesis.

The truth is that there’s much we simply don’t understand  about our reality, and I think it’s more likely than not that we are in  some kind of a simulated universe. Now, it’s a much more sophisticated  video game than the games we produce, just like today World of Warcraft and Fortnite are way more sophisticated than Pac-Man or Space Invaders. They took a  couple of decades of figuring out how to model physical objects using 3D  models and then how to render them with limited computing power, which  eventually led to this spate of shared online video games.

I think there’s a very good chance we are, in fact,  living in a simulation, though we can’t say that with 100 percent  confidence. But there is plenty of evidence that points in that  direction.

When you say there are aspects of our world that would  make more sense if they were part of a simulation, what do you mean  exactly?

Well, there are a few different aspects, one of which is  this mystery they call quantum indeterminacy, which is the idea that a  particle is in one of multiple states and you don’t know that unless you  observe the particle.

Now, common sense would tell us that the cat is already  either alive or it’s dead. We just don’t know because we haven’t looked  in the box. We open the box and it’ll be revealed to us whether the cat  is alive or dead. But quantum physics tells us that the cat is both  alive and dead at the same time until somebody opens up the box to  observe it. The cardinal rule is the universe renders only that which  needs to be observed.

How does Schrödinger’s cat relate to a video game or a computer simulation?

The history of video game development is all about  optimizing limited resources. If you asked somebody in the 1980s if you  could you render a game like World of Warcraft, which is a full  three-dimensional or a virtual reality game, they would say, “No, It  would take all the computing power in the world. We couldn’t render all  those pixels in real time.”

But what happened over time was that there were  optimization techniques. The core of all these optimizations is “only  render that which is being observed.”

The first big game to successfully do this was called  Doom, which was very popular in the 1990s. It was a first-person shooter  game, and it could render only the light rays and objects which are  clearly visible from the point of view of the virtual camera. This is an  optimization technique, and it’s one of the things that reminds me of a  video game in the physical world. 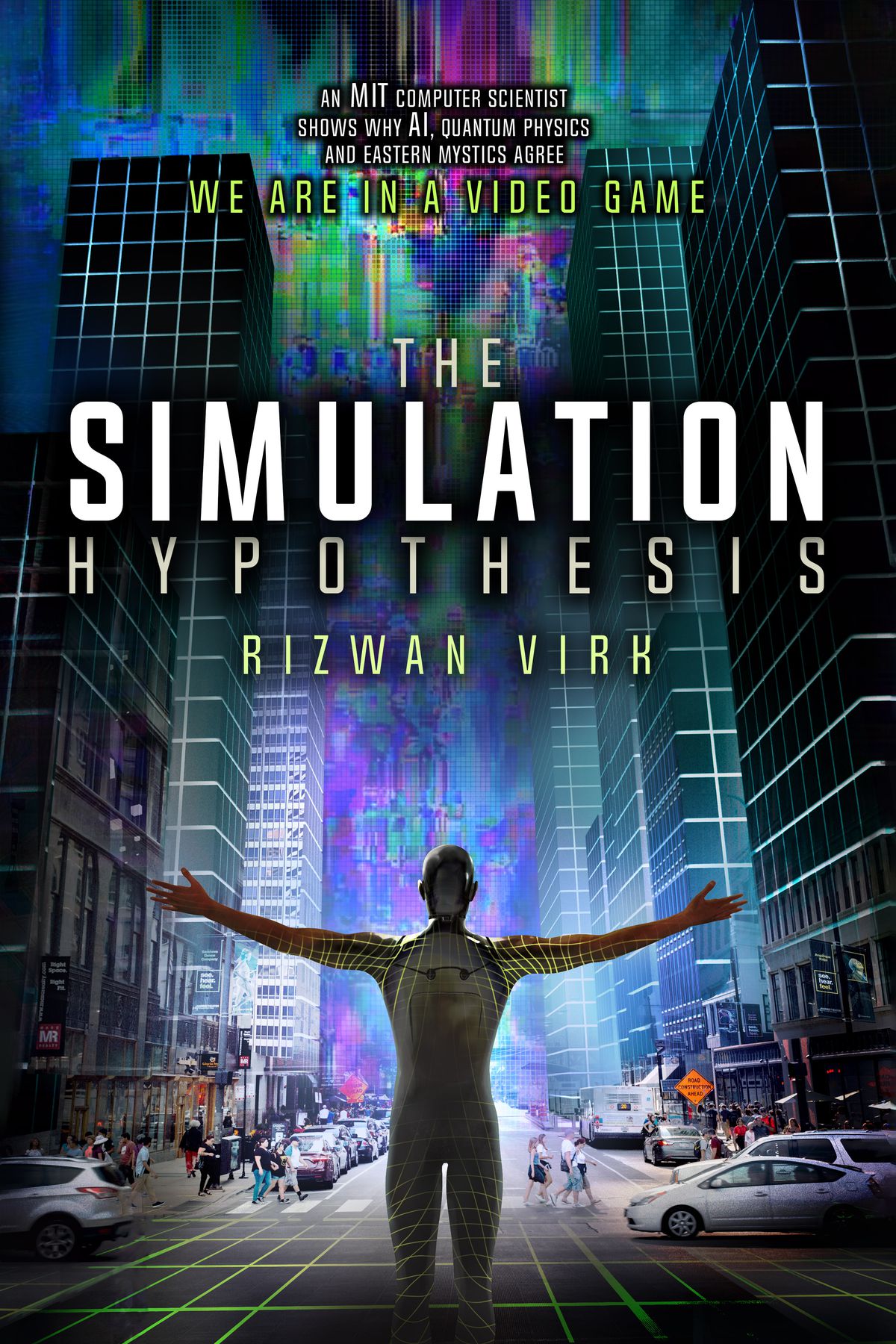 I’m going to do the thing that non-scientists always do  when they want to sound scientific and invoke Occam’s razor. Isn’t the  hypothesis that we’re living in a flesh-and-blood physical world the  simpler — and therefore more likely — explanation?

I’ll bring up a very famous physicist, John Wheeler. He  was one of the last physicists who worked with Albert Einstein and many  of the great physicists of the 20th century. He said that physics was  initially thought to be about the study of physical objects, that  everything was reducible to particles. This is what’s often called the  Newtonian model. But then we discovered quantum physics and we realized  that everything was a field of probabilities and it wasn’t actually  physical objects. That was the second wave in Wheeler’s career.

The third wave in his career was the discovery that at  the core level, everything is information, everything is based on bits.  So Wheeler came up with a famous phrase called “it from bit,” which is  the idea that anything we see as physical is really the result of bits  of information. He didn’t live to see quantum computers come into  reality, but it’s looking more like that.

So I would say that if the world isn’t really physical,  if it’s based on information, then a simpler explanation might in fact  be that we are in a simulation that is generated based on computer  science and information.

Is there any way, in principle, for us to prove definitively that we’re living in a simulation?

Well, there’s an argument the Oxford philosopher Nick Bostrom has made that’s worth repeating. He says that if even one civilization  got to the point of creating one of these high-fidelity simulations,  then they can create literally billions of civilizations that are  simulated, each with trillions of beings, because all you need is more  computing power.

If we were living in a computer program, I assume that  program would consist of rules and that those rules could be broken or  suspended by the people or beings who programmed the simulation. But the  laws of our physical world seem to be pretty constant, so isn’t that a  sign that this might not be a simulation?

Computers do follow rules, but the fact that the rules  always apply doesn’t rule in or rule out that we could be part of a  computer simulation. One of the concepts that ties into this is a  concept called computational irreducibility, and it’s the idea that in  order to figure something out, you can’t just calculate it in an  equation; you have to actually go through the steps to figure out what  the end result would be.

And this is part of a branch of mathematics called chaos  theory. There’s the old idea that the butterfly flaps its wings in China  and it results in a hurricane somewhere else in the world. To figure  that out, you have to actually go through and model every step of the  way. Just because the rules seem to apply doesn’t mean that we’re not in  a simulation.

In fact, it could be more evidence that we’re in a simulation.

If we were living in a simulation as convincing as The Matrix,  would there be any discernible difference between the simulation and  reality? Why would it matter ultimately whether our world was real or  illusory?

There are a lot of debates around this topic. Some of us wouldn’t want to know, and would rather take the metaphorical “blue pill” like in The Matrix.

Probably the most important question related to this is  whether we are NPCs (non-player characters) or PCs (player characters)  in the video game. If we are PCs, then that means we are just playing a  character inside the video game of life, which I call the Great  Simulation. I think many of us would like to know this. We would want to  know the parameters of the game we’re playing so that we could better  understand it, better navigate it.

If we are NPCs, or simulated characters, then I think  it’s a more complicated answer and more frightening. The question is,  are all of us NPCs in a simulation, and what is the purpose of that  simulation? A knowledge of the fact that we’re in a simulation, and the  goals of the simulation and the goals of our character, I think, would  still be interesting to many people — and now we’re back to the case of  the holodeck character from Star Trek that discovers that there is a world “out there” (outside the holodeck)  that he can’t go to, and perhaps some of us would rather not know in  that case.

How close are we to having the technological capacity to build an artificial world that’s as realistic and plausible as The Matrix?

I lay out 10 stages of technology development that a  civilization would have to go through to get to what I call the  simulation point, which is the point at which we can create a  hyperrealistic simulation like this. We’re at about stage five, which is  around virtual reality and augmented reality. Stage six is about  learning to render these things without us having to put on glasses, and  the fact that 3D printers now can print 3D pixels of objects shows us  that most objects can be broken down as information.

But the really difficult part — and this is something not a lot of technologists have talked about — is in The Matrix,  the reason they thought they were fully immersed was they had this cord  going into the cerebral cortex, and that’s where the signal was beamed.  This brain-computer interface is the area that we haven’t yet made that  much progress in, but we are making progress in it. It’s in the early  stages.

So my guess is within a few decades to 100 years from now, we will reach the simulation point.

This article was originally published on April 18, 2019.